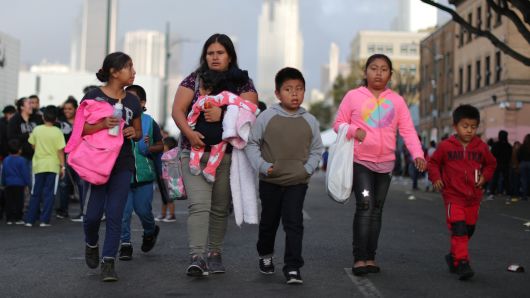 California may be the fifth-largest economy in the world, but poverty is more prevalent among families with children in the state than in the rest of the nation.

“This is a state that has great prosperity,” said Lori Turk-Bicakci, senior manager for the KidsData program at the Lucile Packard Foundation for Children’s Health in Palo Alto, California. “But it’s also a state that has extremely high poverty in some regions as well.”

In fact, in some counties of the state more than 40% of all young kids are living in poverty. A bill pending in the state legislature sets an ambitious goal of cutting California’s child poverty rate in half by 2039 and also eliminating the number of kids in “deep poverty” by 2024.

Gov. Gavin Newsom’s first budget proposal released in January includes more than $500 million next year on programs that target reducing child poverty and much more to address homelessness and the affordable housing shortage.

“California has the highest poverty rate in the nation,” said state Sen. Anna Caballero during a Senate committee hearing this week on the poverty reduction measure she authored, Senate Bill 298. The Human Services Committee voted to advance the bill this week with bipartisan support.

Caballero, a Democrat from the state’s Central Valley region, told the committee that California has set statewide goals on energy, water and fighting climate change and now is the time to do the same for child poverty.

According to the California Budget and Policy Center, nearly one in five children in the state under 18 years old, or nearly 2 million kids, live in poverty, based on the Census Bureau’s so-called supplemental poverty measure, which adjusts for regional differences in the cost of housing. By comparison, nearly 14% of all families with children under 18 in the rest of the nation live below the poverty threshold.

About 500,000 California kids live in families considered in “deep poverty,” or half of the official federal poverty level.

“The vast majority of kids in poverty live in working families,” said Alissa Anderson, senior policy analyst at the budget policy center. “More than eight in 10 children in poverty in California live with at least one adult who is working.”

The proposed bill to slash child poverty rates in California follows a task force report issued last November that recommended strategies to address the situation. Among the recommendations were more housing for low-income families and expansion of Medi-Cal, the government-funded health care coverage for the poor and those at risk of entering poverty.

According to the task force report, “Poverty disproportionately impacts communities of color and immigrants,” including nearly one-third of Hispanics.

“The child poverty rate is increasing, particularly in the areas that we serve in south Los Angeles, especially with the change in immigration policy on the federal level and intensification of attacks on immigrant families,” said Jim Mangia, president and CEO of the St. John’s Well Child and Family Center in Los Angeles.

Still, things could be worse without California’s social safety net programs. In addition to Medi-Cal, the state’s programs include CalFresh for food assistance and CalWorks welfare benefits.

“Without the social safety net, estimates suggest that poverty would increase by 12.5 percentage points, deep poverty rates would triple in California, and over one million more children would be in poor households,” according to the task force.

California has spent more than $21 billion on poverty-focused budget actions since 2012, the task force estimated.

At the same time, the Democratic governor is pushing for more than $2 billion in spending on housing initiatives to help ease the homelessness crisis and to build more low- and moderate-income housing. The governor also wants to grant an increase to the lowest-income families served by CalWorks.

Newsom is expected to release a budget revision in May but has already pledged to keep a boost in some poverty programs.

“The reason we’re doing this is 5.1% of children are living in deep poverty in this state,” Newsom said.