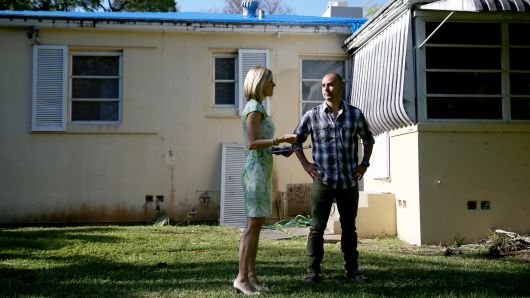 Posted By: Editorial Teamon: April 17, 2019In: Business, News, Real EstateNo Comments
Print Email
A real estate agent shows a prospective buyer a home as he shops for a house in Coral Gables, Florida.

Two weeks of rising rates are taking their toll on homeowners hoping to refinance, but homebuyers are not pulling back.

Mortgage applications to purchase a home rose 1% last week from the previous week and were 7% higher than a year ago. Purchase applications reached their highest level since April 2010.

Total mortgage application volume decreased 3.5% last week from the previous week, according to the Mortgage Bankers Association’s seasonally adjusted index. Volume was 14% higher than a year ago.

Applications to refinance a home loan brought the total down, falling 8% for the week but still rising 26% from a year ago, when interest rates were higher.

The average contract interest rate for 30-year fixed-rate mortgages with conforming loan balances ($484,350 or less) increased to 4.44% from 4.40%, with points decreasing to 0.42 from 0.47 (including the origination fee) for loans with a 20% down payment. The rate was 22 basis points, or nearly a quarter of a percentage point lower than a year ago.

“With mortgage rates up for the second week in a row, it’s no surprise that refinancings slid 8%, and average loan sizes dropped back closer to normal levels,” said Joel Kan, MBA’s associate vice president of economic and industry forecasting. “The spring buying season continues to be robust.”

Mortgage rates continued to move higher this week, hitting their highest level in nearly a month. Rates are rising due to concerns about overseas economies. New data expected Wednesday, however, could have a big impact on rates.

Translate any document from any language through the online publishers