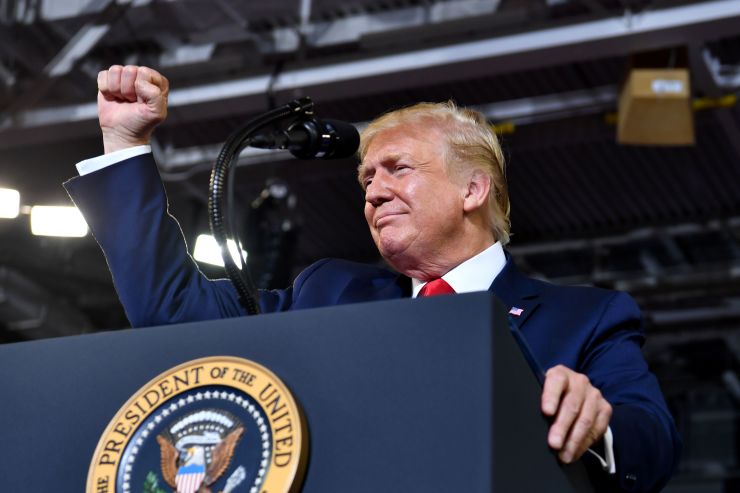 President Donald Trump’s allies in the business world and an army of bundlers have been courting executives across the country in an effort to help raise millions of dollars for the 2020 reelection effort.

So far, the campaign has recruited at least 400 experienced fundraisers to work with the Trump leadership, according to people with direct knowledge of the matter.

The Trump bundler program was rolled out in May and is being advised by George W. Bush’s former national finance director, Jack Oliver.

“What you need is people who have networks through their synagogues, churches, mosques, businesses and even sports teams,” Oliver told CNBC. “The bundling program is a way for people to drum up support through people who know there have been results with this president.”

Among the executives and lobbyists reaching out to fellow business leaders are:

The donor outreach campaign has been a resounding success. The strengthening of the president’s formidable campaign war chest has led his organization, along with the Republican National Committee, to raise over $100 million in the second quarter.

Miller, the founder of lobbying firm Miller Strategies, bundled over $110,000 in the second quarter for Trump, a Federal Election Commission filing says. While Miller has been identified in a recent FEC filing as an official bundler for the campaign, it’s unclear whether Chera is making calls to financiers as anything more than a favor to a president to whom they’ve been loyal since he entered the White House. Durkin and Brown, according to people familiar with the outreach, have started actively bundling for the campaign.

A senior Trump campaign spokeswoman told CNBC that the success of the bundling program has spread across the country and it’s leading to donors who stayed away from Trump in 2016 to jump on board this time around.

“Friends are talking to friends and working together to help President Trump win reelection in 2020,” the spokeswoman said. “People who have never given a cent to any campaign before or stayed out of the mix last time are coming off the sidelines in droves to support President Trump.”

The White House declined to comment. Chera, Miller and Brown did not return a request for comment.

Democrats, meanwhile, are fighting among themselves to capture donors who will finance a formidable campaign versus Trump in the general election. With these business leaders and influential lobbyists using their networks to rake in donors for the campaign, it could give Trump an insurmountable fundraising advantage over his eventual opponent.

Donors who have agreed to back Trump cite his business-friendly policies such as tax cuts and reduced regulations, while arguing the Democratic Party is going too far to the left. A person familiar with the Trump donor outreach, who spoke on the condition of anonymity, said many of the people making calls to GOP executives are working to raise over $300,000 each.

In another good sign for the president’s fundraising hopes, several financiers who backed Trump’s opponents in 2016 flipped to his side in the previous quarter.

“Fundraisers were divided in 2016. That’s not the case this time.” Republican donor Dan Eberhart told CNBC. “Everybody is behind the president toward the common goal of another four years. Those grumblers about the president don’t like his style but they darn sure like his policies.”

The shift in allegiances was noticeable during a June fundraiser at the Trump International Hotel in support of Trump Victory. The event, which featured Trump himself, raised $6 million with 225 people in attendance. One senior campaign advisor explained what was most surprising was how many donors and bundlers were from camps that didn’t back Trump in 2016.

“I looked around the room and there were a ton of Bush supporters. There were Rubio people. There were Walker people in the room. I’m guessing they wouldn’t have been avid Trump people,” this person said, referring to former Wisconsin Gov. Scott Walker. “This has been building over the past year.”

It wasn’t the first time I’d traveled by myself, but a week before I flew, nerves flared. What if I spoke to no one for a week? Would people think it weird I was on my own? And would I be safe?

“Text, images, and video are the paint swatches of 21st-century artists — with a single catch: this form of art has to communicate, engage, and sell.” ― Laura Busche – Visit THE ONLINE PUBLISHERS for high quality content creation services and professional, artistic photography.

Where You Can Get Paid As A Social Media Influencer Online.

5 Reasons TOP Is The Best Digital Marketing Agency To Sign Up With.

Tips to help you choose the best digital marketing agency to boost your tourism sector.

The Role Of Social Media In Online Lobbying.

3 Reasons To Think About TOP For Online Reputation Building.

2 Reasons All Online Reviewers Need To Be With TOP.

3 Ways To Get Success With Freelance Jobs On TOP.

How TOP Helps When You Need To Know How To Repair A Bad Reputation.

Democratic hopeful Steve Bullock on what Amazon and President Trump have in common, and why young voters should care.