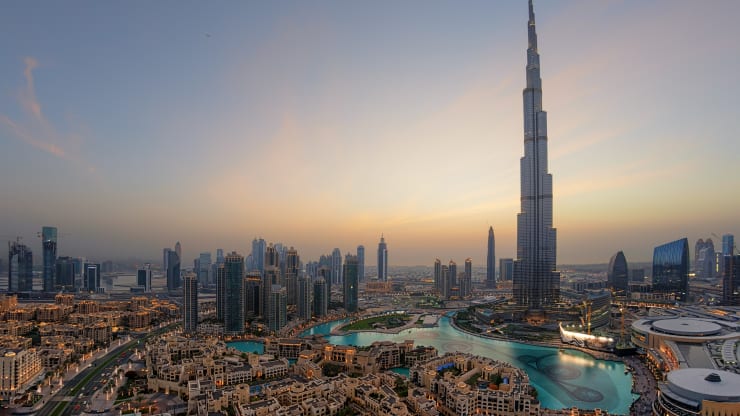 A recent move by the United Arab Emirates (UAE) to cut interest rates will protect the currency and support the economy amid rising external risks, the country’s top central banker told CNBC on Sunday.

The governor also addressed key uncertainties such as rising global risks, diverging global rates and the impact of both on the domestic growth outlook in the United Arab Emirates.

“I think the UAE is on a very good path for recovery,” he said. “I’m confident that we’re on the right recovery path, and I hope the geopolitics settle so the whole region can flourish,” he added.

His comments come just days after the central bank, which pegs its currency to the U.S. dollar, cut its benchmark interest rate by a further 25 basis point to 2%, after the U.S. Federal Reserve cut interest rates for the third time this year by the same margin. Most GCC (Gulf Cooperation Council) central banks follow the Fed’s monetary policy lead in order to maintain exchange rate stability.

“I think this is positive for the economy of the UAE, given that we have been coming through a low oil price period since 2014,” Al Mansoori said, referring to the reduced interest rate.

The latest projection from the central bank indicates that the UAE economy is still performing, with overall growth projected at 2.4% in 2019, comprising 1.4% growth in the non-energy sector and 5% growth in the energy sector. The IMF separately forecasts 2.5% growth for 2020.

But Governor Al Mansoori indicated that several key risks to the outlook remain, particularly the impact of the ongoing trade war between the U.S. and China.

“That is creating a lot of volatility, because there is no clear direction with what’s going to happen,” he said. “The UAE is an open economy, so we get impacted by what happens,” he added.

Al Mansoori also highlighted the risk of a possible recession in the United States.

“You have a trade war, you have the economy now slowing down — the U.S. probably still has some room — but there is a risk of recession,” he added. “The other risk is really the low interest rate itself,” he said, warning that lower global rates are now fueling asset price rises.

“I haven’t seen a time when the oil price, bond markets, equities and gold go up at the same time – this is unheard of – I haven’t seen this before. This tells you this liquidity is fueling a lot of asset prices, which has to end one day,” he said.

Al Mansoori also weighed in on the alarm bells ringing in Dubai’s property market, where prices have fallen by at least a quarter since 2014 amid a heavy pipeline of new supply and weak demand.

The worries prompted Damac Properties Chairman Hussain Sajwani, a veteran of Dubai’s business and property scene, to call upon builders to halt launching new residential projects for “at least a year” in order to avert what he described as a “disaster.”

“I would tend to disagree with this comment,” Al Mansoori said. “I think we have learned the lesson from 2008, and banks have learned their lesson. They have been prudent in extending loans to the real estate sector,” he added.

“If you look at some of the offers they have now, it’s very attractive. So, the risk level has been reduced. You’re not buying at the peak, you’re buying at the low end,” he said.

However, he supported the view that unmitigated building has hurt the sector.

“Supply needs to be controlled, no doubt about it,” Al Mansoori said.

Lending to the residential real estate sector stood at Dh243.5 billion ($66 billion) in 2018, according to the UAE Banks Federation. The central bank is now consulting with its partners on the question of whether or not banks with a real estate exposure above a certain threshold should be subject to additional regulatory requirements.

The passage of the law last week follows a contentious citizenship registry process in northeast India’s Assam state intended to weed out people who entered the country illegally.

3 Reasons That TOP Platform Is The Best Ebooks Hub.

Ways For Social Media Influencers To Make Some Money.

Buying Unique Photos Online From A Photos Gallery Through TOP.

Where You Can Find Ebooks To Read And Buy.

3 Reasons to Opt with TOP for Online Reputation Management Solutions.

4 Reasons TOP is The Best Option For Online Reputation Repair.

Where to Find The Best Quality Translation Services.

4 Great Benefits To Advertising With TOP.

How pay-as-you go energy systems could help with access to electricity in Africa.

Trump might not need to hear much to strike a truce with China: Senior official.

Anthony Scaramucci talks to Bill Kristol about trying to force Trump off the GOP ticket in 2020.

Who Is Winning The Offshore Solar Race?.