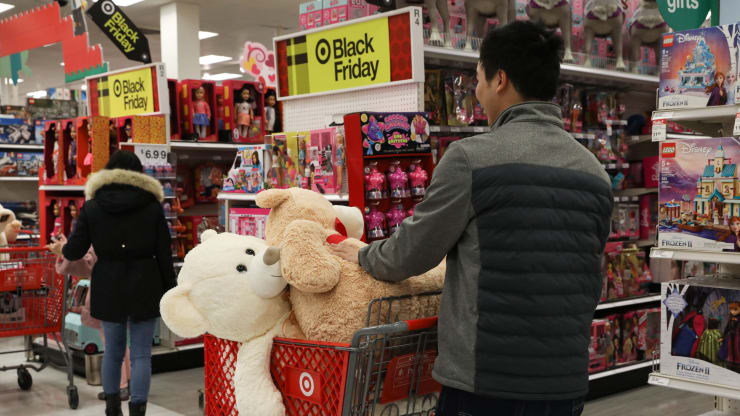 Target had been expected to be a standout among retailers for holiday sales, but the big box retailer reported disappointing results Wednesday.

Its shares tumbled 7% on the news. Walmart, which hasn’t reported holiday results, also traded lower, down 1.8%.

Target said same-store sales during November and December were up just 1.4%, compared with growth of 5.7% a year earlier.

The company said that despite missing the mark, it is maintaining a prior outlook for fourth-quarter earnings. It also said the final three months of 2019 remains on track to mark Target’s 11th consecutive quarter of same-store sales gains.

Target said it found strength in apparel and beauty, while lackluster performance in key holiday categories like electronics, toys and parts of its home business offset those gains.

CEO Brian Cornell said Target “faced challenges throughout November and December in key seasonal merchandise categories.” But “because of the durability of our business model, we are maintaining our guidance for our fourth quarter earnings per share.”

“While we knew this season was going be challenging, it was even more challenging than we expected,” Cornell added in a separate blog post.

Especially this holiday season, Target was expected to be a winner in the toys category. The company has been devoting more square footage in stores to toys, following Toys R Us’ liquidation. It has partnered with Disney to open mini Disney shops within certain Target shops. Target also is now powering the website of the Toys R Us brand that has relaunched post bankruptcy.

But this holiday season, Target said toy sales were about flat with the prior year. The company did say, however, that it continued to gain market share in toys throughout the holidays, based on tracking data provided by The NPD Group.

Target said electronics sales were down more than 6% in November and December, while sales of home items were down about 1%. Apparel sales were up about 5%, beauty sales inched up roughly 7%, and food and beverage sales climbed about 3% during the holiday period, according to the company.

Overall in the retail industry, sales of electronics and appliances grew 4.6% from Nov. 1 through Dec. 24, while the home furniture and furnishings category was up 1.3%, according to a separate analysis of purchases by Mastercard Spending Pulse. The firm said the apparel category grew just 1%, while department store chains saw their overall sales drop 1.8%.

Target’s digital sales rose 19% — thanks to more people using same-day options like curbside pickup when they buy online. Target said use of its same-day services grew more than 50% during November and December compared with 2018, driving about 75% of the retailer’s overall digital sales growth this past holiday season.

Target said it now expects fourth-quarter same-store sales to fall in line with the 1.4% growth it experienced during November and December, compared with a prior outlook of 3% to 4% growth. It said this means full-year same-store sales should rise more than 3%. The same-store sales category represents a key metric used by the retail industry to keep track of purchases made at stores open for at least 12 months.

Analysts had been calling for Target’s same-store sales during the fourth quarter to be up 3.8%, according to a poll by Refinitiv.

“Our fourth quarter performance will benefit from productivity improvements in our stores and supply chain, as well as meaningfully lower clearance inventory compared with a year ago,” Cornell said in the release.

Target’s announcement might have come as a shock to some, because the retailer was largely expected to have had a strong holiday season, while mall-based apparel retail chains and department store operators struggled.

Macy’s, J.C. Penney and Kohl’s have reported same-store sales declines for the holidays. Kohl’s specifically called out its women’s apparel business as its weakest link. And Target showed in its latest fiscal quarter that its apparel sales are on fire.

While leggings maker Lululemon reported a strong holiday season, others like Victoria’s Secret owner L Brands and discount chain Five Below added to the malaise.

Thanks to its investments in new private labels like a grocery line called Good & Gather, store remodels and mobile app updates, analysts say Target has been taking market share from struggling rivals. The Minneapolis-based retailer in November raised its annual earnings per share outlook to a range of $6.25 to $6.45.

While holiday sales for key general merchandise categories climbed a meager 0.2% in 2019 compared with 2018, according to weekly point-of-sale data tracked by The NPD Group, there were “clear winners.” The firm called holiday results overall “lackluster,” thanks in part to companies pushing deals earlier and earlier in the year, thereby lessening the significance of historically key days like Black Friday.

The holiday season also had six fewer days from Thanksgiving to Christmas this year compared with last year, making for the shortest possible calendar. Many retailers said they kicked off promotions earlier because of the calendar setup, hoping to win shoppers before their peers.

Speaking about the holiday season in October, Cornell had said, “Every day is going to count.”

On Wednesday, he said Target noticed this holiday season that people are “more and more comfortable shopping later in the season.” Target said that on Dec. 24 its employees prepared almost five times the number of products for curbside pickups compared with the same day in 2018.

The company also announced Wednesday that its chief stores officer, Janna Potts is retiring, to be replaced internally by Mark Schindele, effective immediately.

“Journalism is an act of faith in the future.” – Ann Curry – Visit THE ONLINE PUBLISHERS TOP online journalists to offer your services as a journalist. Help For Journalists To Find Freelance Work

TOP platform is the best place to check first for freelancer jobs and ebooks to read.TOP Gives A New Opportunity To Earn With Its Ebooks Library.