Latest Articles
Home Business JPMorgan says bitcoin could rise to $146,000 long-term as it competes with gold 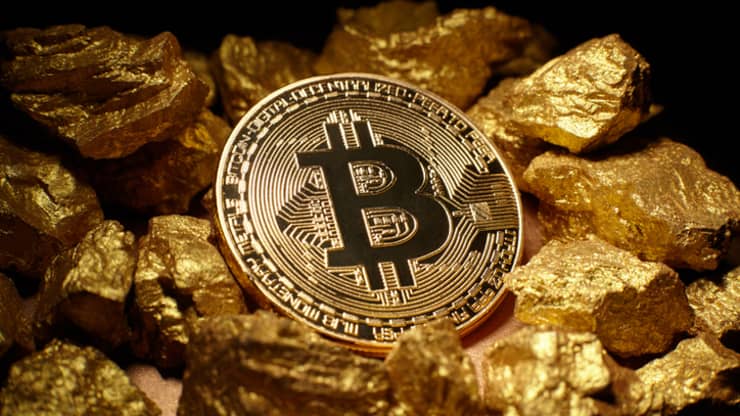 JPMorgan says bitcoin could rise to $146,000 long-term as it competes with gold

Bitcoin’s remarkable ascent past $30,000 has stunned Wall Street — and one of the biggest U.S. investment banks thinks the digital currency could have much further to run.

In a note published Monday, JPMorgan made a bold long-term price target for bitcoin, claiming the red-hot cryptocurrency could rally as high as $146,000 as it competes with gold as an “alternative” currency. But, there’s a catch.

Bitcoin’s market cap — calculated by multiplying the price by the total number of coins in circulation — currently stands at over $575 billion. According to JPMorgan, it would have to climb by 4.6 times to match the $2.7 trillion of private sector gold investment.

For bitcoin’s market value to reach that level, its price volatility would need to drop substantially to give institutional investors the confidence required to make large bets. Bitcoin is known for its wild volatility, and it fell sharply Monday to briefly dip below $30,000 just days after reaching that level.

Bitcoin was up 1% in the last 24 hours Tuesday, trading at around $31,720, according to data from crypto market data provider Coin Metrics.

Crypto bulls have said that bitcoin’s recent rally is markedly different to a late 2017 bubble that saw it zoom close to $20,000 a coin, only to sink as low as $3,122 the next year. That’s because institutional investors are starting to buy in, and this is seen as a crucial confidence boost for the digital asset.

Skeptics view bitcoin’s 2020 rally — which saw it advance more than 300% — as reminiscent of the frothy 2017 market action. They see it as a speculative asset with no intrinsic value and a bubble that is likely to burst at some point.

Still, JPMorgan says there’s “little doubt that the institutional flow impulse into bitcoin is what distinguishes 2020 from 2017.”

“A convergence in volatilities between bitcoin and gold is unlikely to happen quickly and is in our mind a multi-year process. This implies that the above $146k theoretical bitcoin price target should be considered as a long-term target, and thus an unsustainable price target for this year.”

Many institutional investors are using investment vehicles like Grayscale’s Bitcoin Trust as a means of buying into bitcoin. According to JPMorgan, more than $3 billion has flowed into the Grayscale Bitcoin Trust since mid-October while gold ETFs have bled $7 billion.

Some investors may find JPMorgan’s lofty price target for bitcoin quite jarring. The bank’s CEO Jamie Dimon once called the cryptocurrency a “fraud” and said bitcoin mania is reminiscent of the tulip bulb craze in the 17th century.

Dimon is, however, more supportive of the underlying blockchain technology that served as the foundation for digital currencies like bitcoin. JPMorgan has invested heavily in the space, creating its own digital currency called JPM Coin and establishing a new unit devoted to blockchain.

Experience the freedom you have always wanted in business, incorporate your new company offshore in Vanuatu today.  Easy to do. Very profitable.  More information available. #topcompanyformation.com