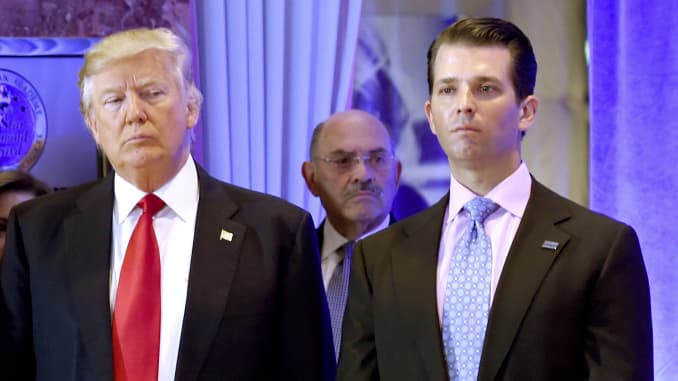 The prosecutors, who are conducting a sweeping probe surrounding Donald Trump and his company, are also questioning gifts that Weisselberg and his family received from the former president, according to the Times.

The newspaper, citing people familiar with the matter, said prosecutors working under Manhattan District Attorney Cyrus Vance Jr. have recently zeroed in on Weisselberg in an apparent effort to get him to cooperate with the wide-ranging criminal probe.

Weisselberg, who has worked for Trump and his father, Fred Trump, throughout his career, has not been accused of wrongdoing. Spokespeople for the Trump Organization did not immediately respond to CNBC’s request for comment.

US President-elect Donald Trump along with his son Donald, Jr., arrive for a press conference at Trump Tower in New York, as Allen Weisselberg (C), chief financial officer of The Trump, looks on.
Timothy A. Clary | AFP | Getty Images

Vance’s office was known to be investigating hush-money payments made during the 2016 presidential campaign to two women who said they had affairs with Trump years earlier. Trump has denied he had sex with the women.

The prosecutors have also suggested they could be investigating possible insurance and bank fraud. The DA’s office is looking into allegations that the Trump Organization manipulated the valuations of some real estate assets to reap financial benefits.